Litchfield, Illinois is an easy-going, salt-of-the-earth destination, packed with Americana charm and Route 66 nostalgia. Located an hour between the Land of Lincoln in the Illinois State Capital of Springfield and the Gateway to the West, St. Louis, MO, Litchfield’s location couldn’t be better. Want more information about Litchfield, Illinois? Just fill out the form below!

A Short History About Litchfield Illinois

Litchfield began in 1853 with the genesis of the Terre Haute, Alton and St. Louis Railroad.

Then, oil and gas were discovered and two coal mines were sunk in the area in the 1880s. As the years progressed, Litchfield was blessed with six railroads: The Wabash, now Norfolk Southern; Illinois Central; Chicago; Burlington and Quincy; The Interurban; Litchfield and Madison and the C.C.C. and St. Louis, known as the Big Four. Two remain – the C.B. and Q. and the Norfolk Southern.

Among the factors that contributed to Litchfield’s continued growth was the building of U.S. Route 66. U.S. Route 66 was the main highway from Chicago, IL to Santa Monica, CA until 1977. Two alignments of the original ‘Mother Road’ remains intact today. Route 66 continues to be an active party of Litchfield as it brings tourists from all over the world.

Litchfield has continued to adapt to the changing transportation industry. With the development of the interstate system, Litchfield has continued to expand. Now located along three major crossroads, Route 66, Route 16, and Interstate 55, Litchfield is best known as the halfway point between Illinois’ Capital, Springfield, and St. Louis, Missouri. It is a city known for its Route 66 icons, expansive lake, and lush landscapes. 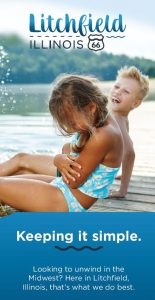